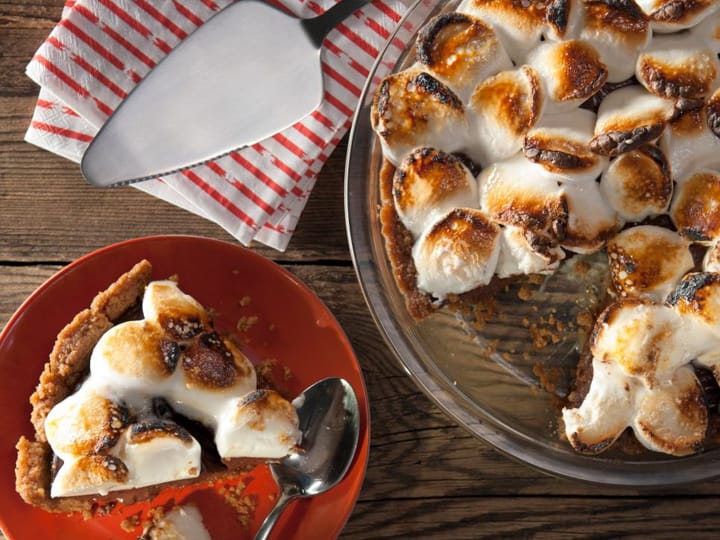 For the crust: Preheat the oven to 325 degrees F.

Break up the graham crackers by hand and add to the bowl of a food processor fitted with the steel blade. Process the crackers until ground. Add the butter and sugar and pulse until the mixture looks like wet sand.

Transfer the graham crackers to a 9-inch pie plate and, using your hands, press to form a crust. You just want the crust to be of even thickness around the pie plate. Bake until crisp and the crust begins to brown, about 15 minutes. Cool completely before filling.

For the pudding: Add the milk, cream and sugar to a medium heavy-bottomed saucepan and whisk in the cornstarch, followed by the cocoa powder and salt. Bring the mixture to a simmer over medium heat, whisking until the pudding thickens, about 2 minutes. Remove from the heat and whisk in the bittersweet chocolate and vanilla.

Pour into the cooled pie shell and chill, covering pudding surface with plastic wrap or wax paper to prevent a skin from forming. Chill in the refrigerator for at least 2 hours to allow the pudding to set.

Just before serving, preheat your broiler. Top the pudding pie with the large marshmallows, covering the entire pie surface. Transfer the pie to a baking sheet. Broil the marshmallows 4 inches under the broiler until the tops are golden brown, 2 to 3 minutes. Keep a close eye on this, it goes fast! Alternatively, use a kitchen torch to brown the marshmallow topping. Serve immediately.

You can always buy a pre-made graham cracker crust at your grocery store.