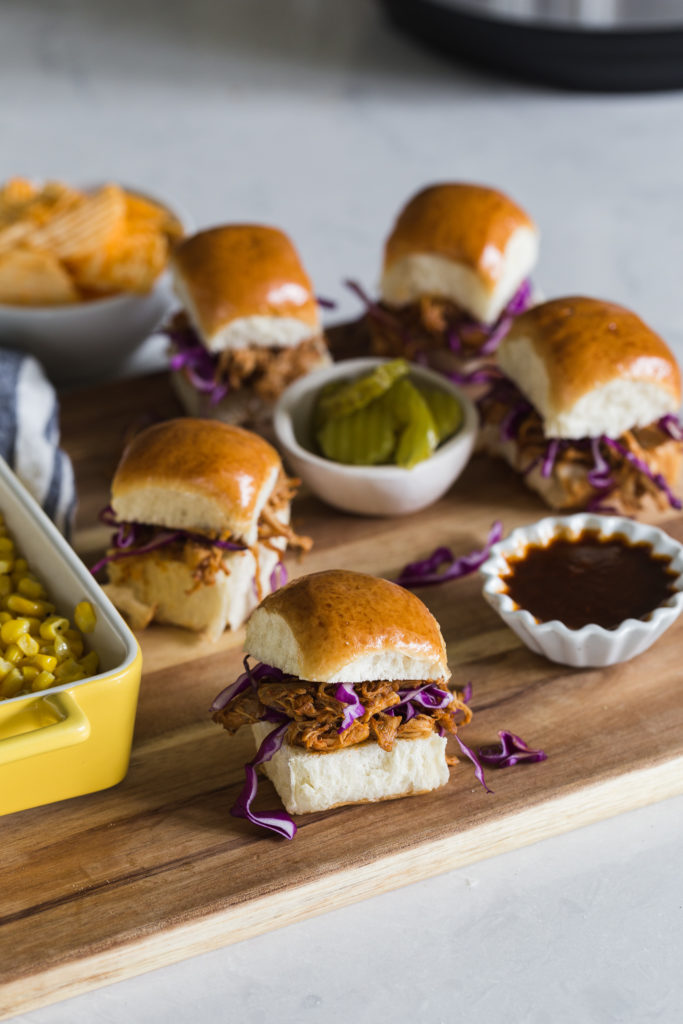 It seems that an electric pressure cooker partially acts as a speedy slow cooker. One of the things I use my slow cooker for the most is cooking tough cuts of meat low and slow. Many times this turns into shredded beef, chicken, pork, etc. that I can use for everything from tacos to salads. The Instant Pot is definitely faster in this sense and I find the result to be very similar- not necessarily better or worse. But sometimes it’s nice to throw something in the slow cooker in the morning and know that it will be waiting for dinner- so I guess it all comes down to what circumstance you find yourself in most often. Regardless, these Shredded BBQ Chicken Sliders were delicious and a hit with my family. The BBQ Sauce is made in the IP as well so very little dishes and a great recipe for leftovers. One thing I haven’t tried is using the “slow cooker” setting on the IP- but I’ve read that it’s not it’s best feature. Anybody use this setting with success?

Season the chicken thighs with the salt and pepper – meanwhile, make the sauce.

For the sauce, set the pressure cooker on the saute setting. Add the ketchup, molasses, Worcestershire, vinegar, and garlic.Stir in the chile powder, cumin, paprika, and pepper and simmer until the mixture is thick, about 3 minutes.

Add the chicken and cover with the lid. Cook on HIGH pressure for 15 minutes before allowing the pressure to release naturally.

Transfer the chicken to a large bowl using tongs. Return the Instant Pot to the saute function and bring the sauce to a simmer for five minutes. Adjust seasoning with salt and pepper, to taste. (Sauce will thicken as it cools) While the sauce is simmering, shred the chicken. Toss the chicken with some of the barbecue sauce and serve the extra sauce on the side.