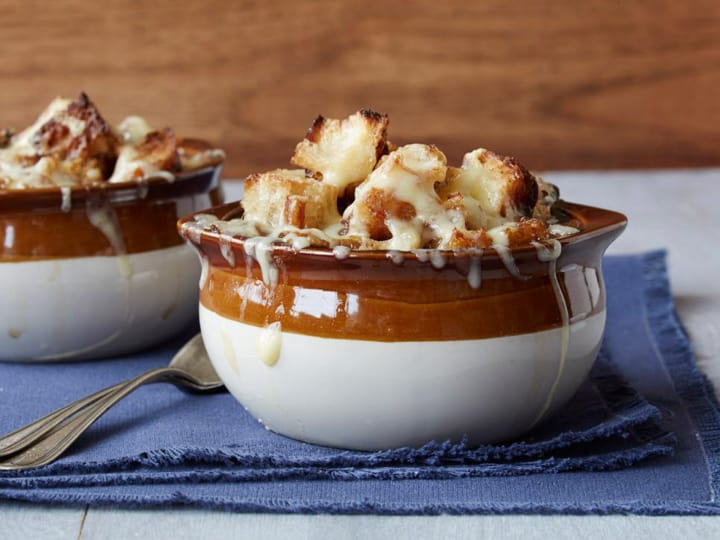 It’s been blustery and cold here in Portland, so we’re eating soup by the bowlful to warm up. One of my all-time favorite soups is the classic French Onion: it’s decadent, flavorful, and deceptively simple to make. Its creation is somewhat unknown but dates back to the 18th century. French Onion was originally considered a peasant dish because meat was a luxury and onions were cheap and plentiful. Somewhere along the way, Parisian restaurateurs added a healthy heap of grated cheese, or gratinée, and the soup was rebranded into the dish we’re familiar with today.

Any dish that includes cheese and bread gets two big thumbs up from my family. The cheese we’re using here is Gruyère, a hard yellow cheese of Swiss origin. You can also use Comté, which is a style of Gruyère hailing from an eastern province of France. Both kinds of cheese are used in a variety of savory recipes as they complement other flavors instead of overpowering them and are particularly good for melting.

As for the bread component, I like to use ciabatta but any crusty bread will do. Many versions of this recipe instruct you to lay slices of bread flat on top of the soup, but I think the bread cubes are a more dynamic look. Plus, this way some of your bread stays nice and crunchy while the bottom layer soaks up the soup. Traditionally this soup is served in a soup crock but any oven safe ramekin will also do the job.

The genius of this dish is the transformation of a relatively simple ingredient into a complex flavor with a little time and patience. Chopping onions is a chore that everyone wants to avoid, and there’s a lot of half-baked hacks out there that claim to minimize tears, but I’ve found that honing my knife skills to get the job done quickly has been my best bet. Invest in a sharp, quality chef’s knife and you’ll never look back. During the caramelizing process, make sure you’re regularly moving your onions around so they get evenly cooked. Brown bits will form in the pan; just integrate them into the onion mixture…this is actually a major part of why they’re so delicious! I’ve found that even self-proclaimed onion haters come around to liking caramelized onions in French Onion soup as the sharp onion flavor is tempered down to a rich sweetness.

n a large heavy-bottom pot, melt the butter over low heat. Add the sliced onions, thyme, salt, and pepper and continue to cook, stirring occasionally until the onions become a deep golden brown and very soft, about 30 minutes.

Add the flour and cook for 1 to 2 minutes. Add the white wine and scrape up any dry bits on the bottom of the pan, increasing the heat to a boil for 2 to 3 minutes. Add the beef stock, and the chicken stock, and allow the soup to simmer for an additional 30 minutes as the flavors develop. Season the soup generously with salt, and pepper, to taste.

Preheat the oven to broil, or turn on the broiler. Arrange the ciabatta cubes on a baking sheet and toast until crispy, about 3 to 5 minutes.

Remove the thyme sprigs and pour the soup into 4 to 6 oven-safe crocks or bowls. Top with the toasted ciabatta cubes and a generous amount of grated Gruyere.

Place the crocks or bowls under the broiler for 3 to 5 minutes, or until the cheese is melted and begins to brown.