Cherry Pie in a Jar 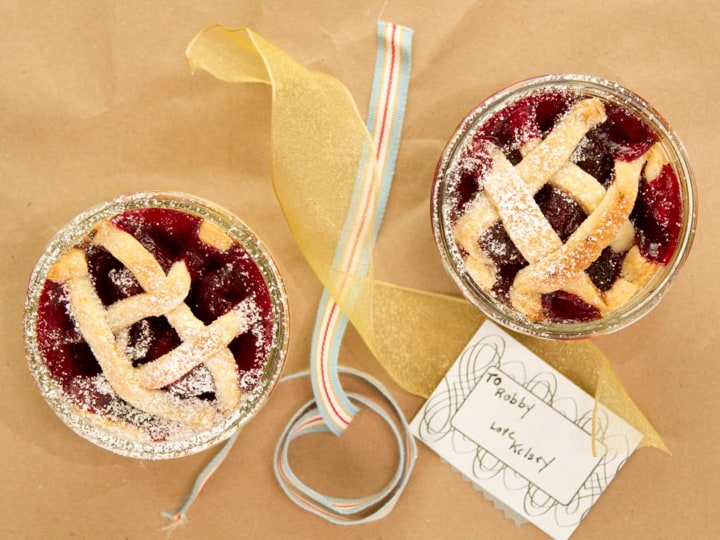 For the cherry filling: In a heavy-bottomed skillet cook fresh or frozen cherries and lemon juice over medium-high heat, stirring, until slightly softened, about 2 minutes. Add the sugar, cornstarch, and cinnamon. Bring the mixture to a simmer, stirring, until thickened, about 3 minutes. Remove the mixture from the heat, stir the almond extract into the cherries and cool.

For the pies: Roll out the dough on a well-floured surface. Using the ring from the lid of the jar, cut out 4 circles of dough, that will be the tops of your pies. With the remaining dough, use a 6-inch inverted pie plate to cut 4 circles that will line the inside of each 1/2 pint glass oven-safe jar. Working with the dough as little as possible, make sure that the dough covers the surface area inside the jar with the exception of a 1/2-inch at the top. Once each jar is lined with pie dough, fill each with 1/2 a cup of cherry pie filling. Place a small pat of butter on top of each pie, and top with the pie dough circles or make a lattice pattern. Make sure you vent the top of the crust by creating a slit so that the steam can escape. Using your finger or a fork, press the 2 pieces of dough together around the perimeter. Brush each pie crust with melted butter and sprinkle with sugar. Seal each jar with its metal lid and place in the freezer for up to 3 weeks.

Baking instructions: If baking pies fresh, preheat the oven to 400 degrees F. Bake 40 to 45 minutes or until the crust is golden brown and filling is bubbly. If baking pies that have been frozen, bring them to room temperature before placing in the oven.